Tragically, yesterday  our ride came to an abrupt end when Janie was hit by a car.  Let me first say that she will be okay.  Her entire left side is chewed up with road rash, places are just raw meat.  She had about a three quarter inch gash on her ear which is stitched together.  Also, she has hair line fractures on her L-5 vertebrae.  The doctor says the spine is stable and will heal.  She is sore but like Janie in good spirits.
We were traveling on RT. 69 between Chrystal Falls going east to Sagola, on a mostly flat, straight road, lightly traveled road with good visibility.  Our lights were flashing.  Many drivers, including drivers of 18 wheelers have commented on how effective these lights are, saying that they could see them a mile back and that anyone not seeing them is not paying attention.  This driver was NOT PAYING ATTENTION.
Janie was having such a wonderful time on this trip.  Each day was more fun than the last with more to come.  When she cried it wasn't because she was in pain or that her brand new bike is totaled,  it was because  our adventure had ended.
John, Janie's husband is in route to rescue us. In the meantime, we are in the good hands of my college roommate, Marilyn, an excellent hospital staff, and the Iron County Sheriff Department.  Everyone has been most gracious and helpful.
We will make our plans for getting down state later today or tomorrow.  The doctor says it is okay for Janie to travel.
The whole trip we have been saying that we had a travel angel with us.  She certainly was yesterday in that Janie is still with us.
Posted by Lois at 7:59 AM 1 comment:

We are currently in a motel in Crandon, WI, because storms are predicted tonight.  We left Shawano after two nights, which allowed us a day off the bike and to enjoy the Wolf River on tubes.  Our mission was heat avoidance.  However, the day we left was the hottest to date.  We rode only 38 miles to Vee's campground.  This is a great family campground, complete with a pretty northern lake and a bar.  We talked with a great grandmother who has been coming there for 20 years and now her grandchildren are bringing their children.,
Our ride today was 58 miles along great roads and rolling hills, with some challenges greater than others.  The number of challenges made for a tough day, but we made it in time to enjoy a great meal at the Crandon Hotel.
When we left Shawano County, we left behind the Shawano County Barn Quilt Project.  Almost every barn we passed had a chosen quilt square painted on it. Tried to insert picture, but it is late.  I
Will try another time.
Tomorrow, we head to Iron River, MI, leaving Wisconsin behind.  While here we have enjoyed Two Women beer and experienced cheese curd, which appears on every menu.  As for me, I will leave the cheese curds for the Badgers. 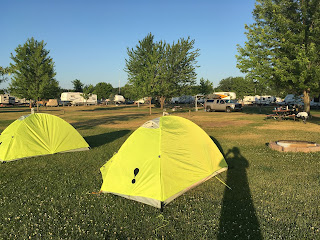 Home away from home. 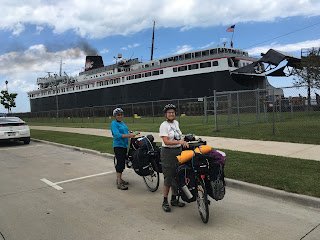 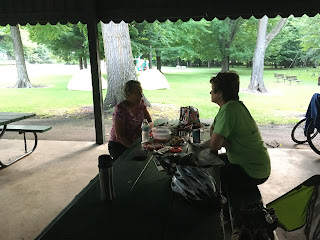 Email ThisBlogThis!Share to TwitterShare to FacebookShare to Pinterest
After leaving Ludington on a morning the weather channel was posting the temperature for Ludington to be 47 degrees, we are now in Shawano, Wisconsin waiting for the heat to abate.  The heat indexes for the next few days are ranging between 105-112 degrees. So today we will probably go tubing on the Wolf river.
We had the smoothest ride possible on the SS Badger.  We met some interesting people on the Badger, among them was Conner Clock, a play producer, a graduate of Western Michigan.  He had just  completed a run in Ludington.  From his passion, I would say if you see his name on the play bill, don't miss his production.
After landing in Manitowoc around noon and as a result of conversations, we headed north to Point Beach State Forest for camping. When we arrived there were 5 sites available, so you know we did not get the choicest site, but it was perfect!  There is not a bad site in the park. We decided to take the Sabbath off.  Good planning, we woke up to thunder storms and some pretty heavy rain.  We did minor maintenance on the bikes to discover Janie's brakes were rubbing,  the back wheel was barely turning.  She had been working really hard!  On a trip to the bike shop the next day we learned that both front and back brakes were dragging and the front derailer was loose.  Big cudoos and many thanks to Heavy Pedal Bicycles for great service and help.
On the road again, we landed at Calumet County Park for the night, upon the recommendation of two local cyclists, Carolyn and Paul Kees.  The ride into the park was fun but the ride out in the a.m. was a b-----h!  But according to Carolyn and Paul much easier than the State Park.  The rest of the day was relatively flat and took us to the village of Black Creek, where we met the best that America offers.
This town was supposed to have a B&B.  How to find it?  The first person we saw was a young lady, we later learned was Kendal.  We asked her help in finding lodging.  She called everywhere, no lodging within 30 miles.  Yikes!  I asked if there was a city park in town.  A man standing nearby, and by this time was trying to help said , "yes two blocks away.  I know the chief of police and the village president.  I'll talk  to them." The end result was we camped in the lovely village park with a lake.  Upon returning from a walk to dinner, we were greeted by Mary, who had heard about our ride from her daughter, Kendal.  She had brought us food and water.  We enjoyed the strawberry short cake.  Thank you Mary.
As we left Black Creek and headed north, we are noticing that the landscape is changing from farmlands to more wooded.  That brings us to Shawano where we are currently experiencing thunderstorms sitting in a motel.  I have new technology  since the last ride and I don't know how to post pictures.  That sounds like a good rainy day project.

Aaah 5 days of pedaling "Pure Michigan"  We have pedaled by large and beautiful  dairies, large lumbering operations, golden fields of grain, beautiful Up North lakes and lastly a beautiful ride through the Pere Marquette State Forest.  We started out the trip mostly flat with a few hills, enough to reacquaint this "flatlander" from Baytown, TX with the bike gears.  By day three, I knew very well why I needed them.  Tonight we are treating ourselves to a motel in Ludington, MI . in preparation for an early departure on the SS Badger tomorrow across Lake Michigan.  We stayed at one there motel, when I asked about wi-fi they said they might get it next year, which explains lack of postings.
However, this morning  we woke up to a cold drizzle and 58 degrees.  Now here is the difference in the sister from the north and the one from  the south, I'm freezing and Janie is in "hog heaven" as they say in my neck of the woods.  A little cooler would have been fine as we had a couple of 90+ days with high winds.  With the heat, high winds and hills (3 hs), we exercised our right of self-contained riding to call it a early day.
Along the way, we have met some very kind and helpful people.  Day 2, as we were packing up, a lady stopped  by to inquire about our trip and Janie mentioned that her telephone charger plug had lost a prong,  she said that she had several of those and would Janie  mind if she gave her one.  Janie said that would be great.  The lady said "wonderful that way I can feel part of me is on the trip".  We walked into a bar for lunch carrying items that needed charging and asked for plugs.  They had never thought about plugs before, when we left we had to walk around gathering things up.  At the same bar, they were willing to fill my cooler with ice,  the look on the ladies face when she saw our bag of wine was priceless!  She said, "you ladies know how to roll".  The proprietor of our motel this evening gave us a great price on a great room, Americas Best Value Inn.
Things I've learned:  Milk weed plants smell wonderful, never knew; milk truck drivers are much more polite than logging truck drivers;  and we are still moving this earth around judging from the number of dirt trucks.
Will check back in at next opportunity.
P.S.  The milk trucks are the big tanker trucks that go to the dairies, not the kind that used to bring the milk bottles to your front porch milk box, for those old enough to remember.

After a lot of talk and little planning, Janie, my sister and I are about ready to start a bicycle ride from Lansing, MI. to Ludington, MI, taking the USS Badger across Lake Michigan to Wis., north to the UP then East  to St. Ignace, then South back to Lansing.  Our concern was in keeping 4 seniors healthy in order to do ride, those to ride and those to stay home alone.  However, after selling a house, moving, (for the most part boxes untouched), some heart issues, and an equipment shafu  causing a one day delay, we should be on our way tomorrow.
Posted by Lois at 4:49 PM 1 comment:

Closing This Adventure Out

We left Liberty with very gray skies.  All morning long it seemed like it wanted to rain but just couldn't do it.  There was mist which slowly turned to heavier mist then drops and about ten miles from home turned to real rain for a short time.  Our northern relatives kept saying they would rather ride in the rain then 80 degrees (like 80 is hot).  We made excellent time and arrived in Baytown in time to celebrate at our neighborhood restaurant with margaritas in addition to lunch.
After cleaning up, unloading the bikes, and Michigan State basketball, we headed out for birthday dinner.
Today was a perfect end to a great adventure.
After a day of rest, Janie and John headed north to Michigan probably through a snow storm.  Makes me appreciate Texas.

Some Random Thoughts:
The flowers were beautiful; wisteria, azalea, camellia.  Supposedly it is not a good year for azaleas, but they were still beautiful.
Judging from the dirt trucks on the rode we are still moving this earth around.  Also, judging from the logging trucks the building business must be booming.
The most popular vehicle on the road is a white pickup.
The most dangerous thing about riding a bike is not the possibility of being hit it is the danger of being struck by the stuff flying off vehicles, tire tread, stuff out of pickup beds, logs off from logging trucks, etc.
We had five flat tires, one broken mirror, and one case of chiggers, darn nature stops!
The best thing about traveling by bicycle is the people you meet along the way! 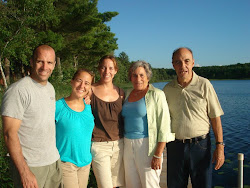